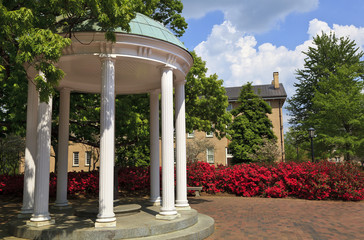 Just a month ago, current and former faculty from across the UNC system sent a letter to top UNC System leadership and the UNC Board of Governors, urging them to join other university systems in making online instruction the default for the coming Fall semester as the COVID-19 pandemic continues.

Despite their concerns, the BOG told system universities they had to reopen and that individual university chancellors could not make those decisions independently. And in less than a week into the start of classes, the University of North Carolina at Chapel Hill announced a fourth cluster of COVID-19 cases on campus, as more and more local universities are seeing spikes in cases.

From The Progressive Pulse:

The board and president have been silent in the last week on the mounting infections at UNC-Chapel Hill, East Carolina University and Appalachian State University. Calls for comment have been referred to the individual universities.

An increasing number of students are leaving campus on their own, saying they do not feel safe and believe the school has mismanaged the return.

The Daily Tar Heel, the campus’ independent student newspaper, published a scathing editorial Sunday calling out the school’s lack of transparency and failure to heed  both the warnings of the Orange County Health Department and the will of students, staff and faculty.

From The Daily Tar Heel:

The administration continues to prove they have no shame, and the bar for basic decency keeps getting lower.

Even faculty — though many of them continued to teach classes in-person — saw it coming.

The Editorial Board recognizes that the decision to transition away from in-person classes is one that ultimately lies with the Board of Governors — not the administration. However, Guskiewicz, Provost Bob Blouin and the rest of the administration are far too eager to attribute blame to parties other than themselves. Matters are rarely as complex as UNC makes them seem. The chancellor of a public university with a multi-billion dollar endowment is hardly powerless — not now, not ever.

Last month, the BOG, who have been appointed by Republican leadership, stressed the importance of reopening and discussed a “worst-case scenario” for a possible budget cuts of up to 50% at its 17 campuses — potentially putting hundreds of faculty out of work.

The BOG was also eager in their decision to monetarily exploit students as the board made the decision for no tuition or fee decreases, refunds or pro-rating if their universities move to online instruction due to the ongoing COVID-19.

The BOG has continually shown a lack of consideration for students, faculty and staff as it responds to the pandemic. And as students and faculty demand for accountability and safety protections, the BOG remains unresponsive.

Recently, university leaders from UNC-CH announced it’s shift to remote learning as community members called out the university’s failures and lack of leadership in the handling of COVID-19.

Bottom Line: In their haste to treat the school system like any other business, the BOG mirrored its Republican leadership within the General Assembly — by valuing money over the lives of faculty and students.