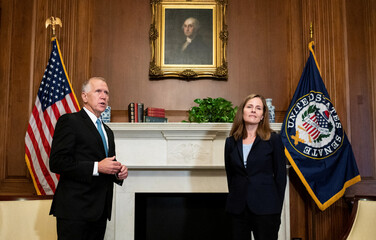 Hours after a 52-48 vote in the U.S. Senate, Amy Coney Barrett became the newest member of the U.S. Supreme Court on Monday evening. Senate Republicans rammed through Barrett’s nomination eight days before an election, despite their refusal to seat an Obama nominee to the high court more than eight months before an election.

COVID-19 stimulus package negotiations which would help the millions of Americans and small businesses financially devastated by the pandemic.

Barrett’s swift confirmation came with the support of North Carolina Senators Richard Burr and Thom Tillis, yet both senators opposed President Obama’s nomination to the highest court just years before.

The push to get Barrett confirmed plays directly into the effort in creating a 6-3 conservative majority court which would potentially overturn Roe v. Wade and the Affordable Care Act.

An estimated 29 million Americans, and about 1 million North Carolinians, could lose access to health insurance if ACA is overturned, according to the nonpartisan Economic Policy Institute.

With days until election day, Senate Republicans aren’t dealing with the most pressing issues of looking after the health and welfare of those who put them in office. Rather, they are focused on cementing their own agendas and policies through the highest court.

Bottom Line: Amid the pandemic, long-standing problems created under Republican leadership have been magnified, and we need a Supreme Court that is committed to protecting the rights of all of us, not just those in power. Yet, Trump and Senate Republicans couldn’t care less.