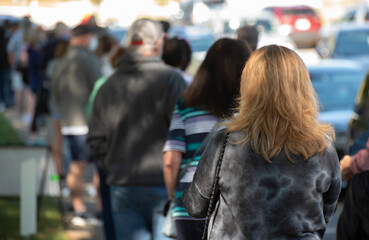 With record-breaking voter turnout stretching from North Carolina to Texas, one thing is clear; Democracy is winning and Republicans’ voter suppression efforts are losing.

According to the North Carolina State Board of Elections, more than 1.5 million North Carolinians cast their ballots in the first three days of early voting. In addition to early votes cast in person, 605,322 absentee ballots had been cast as of early Sunday morning.

At least 41.5 million voters have cast ballots in the 2020 election, according to the U.S. Elections Project. The current national total of voters that have cast votes accounts for at least 30% of all votes cast in the 2016 election.

Multiple states are close to nearly 50% of their 2016 total, including North Carolina, Georgia, Montana, New Mexico, and New Jersey.

Americans’ rush to vote is leading election experts to predict that a record 150 million votes may be cast and turnout rates could be higher than in any presidential election since 1908, according to Spectrum News.

If you forget to early vote, you can go vote in-person on Election Day, Nov. 3, at your precinct. The same safety precautions against COVID-19 will be in place. You can look up your Election Day polling place here: vt.ncsbe.gov/RegLkup/.