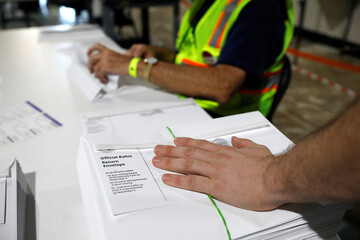 Trump’s campaign and North Carolina’s Republican legislative leaders are continuing their effort to undermine voters, as they asked the U.S. Supreme Court last week to return the state to a shorter deadline for accepting late-arriving absentee ballots postmarked by Election Day.

This comes after a new ruling by the State Board of Elections (SBOE) directing counties to immediately resume notifying voters whose ballots arrive with a range of deficiencies on how to fix the problem or start the process over.

The state board made the change as part of a legal settlement in state court with a union-affiliated group that had challenged what it saw as restrictive voting rules during the coronavirus pandemic. The settlement said the longer deadline was needed in case of postal delays. While the board has a Democratic majority, the settlement was also approved by two Republican board members who later resigned amid fallout from their party.

In late September the SBOE announced that absentee ballots could be accepted by counties until Nov. 12, as long as they were mailed by Nov. 3, which is Election Day. The rule change lengthened the period for accepting ballots from three to nine days after the election.

The appeal filed on Thursday by the Trump campaign argues that the Supreme Court should go further than just shortening the ballot deadline in North Carolina, but to block directives allowing for voters to fix errors in their absentee ballots.

On Thursday, NC’s Attorney General Josh Stein stated, “If voters comply with the statute and mail in their ballots on or before Election Day, they should not be penalized by slow mail delivery in a pandemic. The Republicans have lost this argument at every turn because they are trying to stop votes from being counted”.

For weeks, Republican state Senate leader Phil Berger and Republican House Speaker Tim Moore, with the help of Trump’s campaign, have attempted to reverse common sense measures meant to ensure that every vote is counted.

Trump and his Republican allies have a history in undermining voters — from slowing down postal delivery times, spreading false claims, and pushing forward voter suppression laws and racially gerrymandered maps.

Bottom Line: This is just another reason that we must hold all our officials accountable, from the local level all the way up. Voting this election is our opportunity to correct their wrongdoings and elect leaders that will work for our interests, not their own.