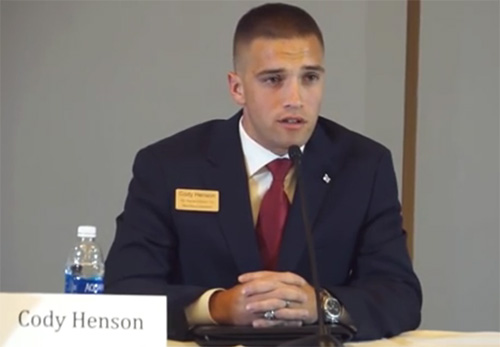 North Carolina State House Representative Cody Henson has been court ordered to stop harassing his estranged wife. Mr. Henson has been sending large amounts of texts to his wife who is seeking a divorce. According to experts on domestic violence, texting is a relatively new method of intimate control. The abuser seeks to manipulate and control their partner through relentlessly texting and calling even after being told repeatedly to stop. Among the large volume of texts sent by Rep. Henson, he threatens to commit suicide if his wife does not return to him.

We have to ask the question, is this someone who should be making laws? Should he be making laws that will affect women and domestic violence victims statewide? At the time of this writing, neither Rep. Henson nor the NC Republican party has made any statement as to whether or not Henson will step down.

A state judge has issued a long-term protective order against a North Carolina state legislator after determining text messages that his now-estranged wife received amounted to “mental harassment.”

News outlets report Judge Fritz Mercer granted on Tuesday the domestic violence protective order requested by the wife of two-term Rep. Cody Henson of Transylvania County. A temporary order had been issued a few weeks ago.

Mercer said none of Henson’s texts were threatening but reflected “somebody who does not want this marriage to be over.”

Kelsey Henson had asked for help to keep her and the couple’s children safe. Mercer’s order is effective until next January.