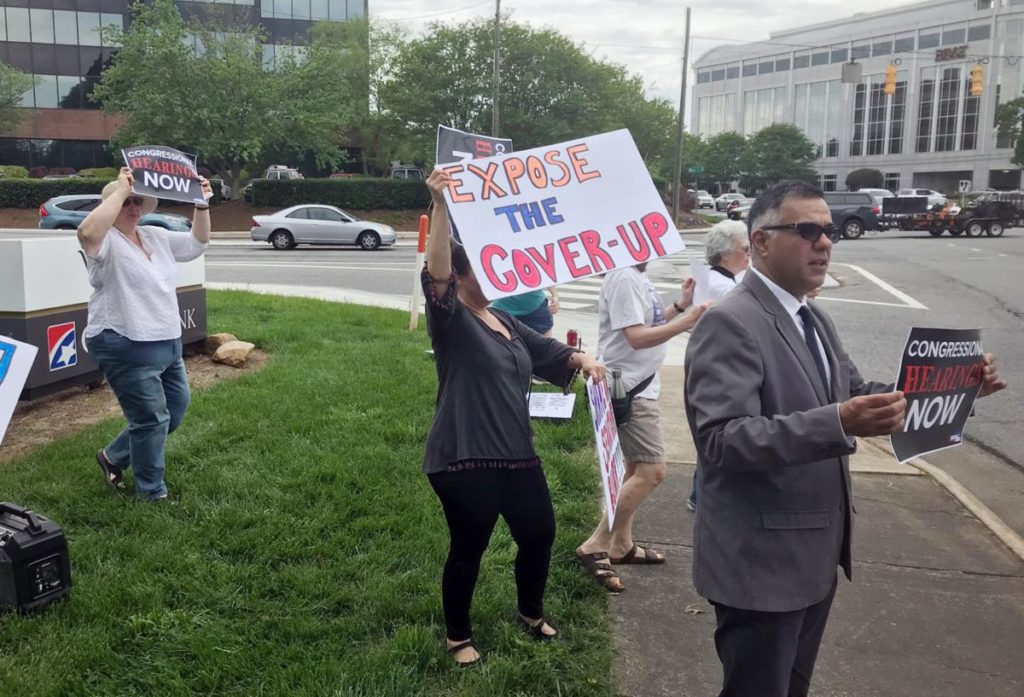 According to the Mueller report Richard Burr corresponded with the White House about the Russia probes, and the White House counsel’s office “appears to have received information about the status of the FBI investigation,” the special counsel report said. Now Senator Burr claims he has no memory of this conversation.

Concerned citizens in Winston-Salem are deeply alarmed about these recent revelations, and they are demanding to know the truth. They want Senator Burr to testify under oath in front of Congress as to what he told the White House and when.

From The Winston-Salem Journal

A group of 12 protesters criticized U.S. Sen. Richard Burr, R-N.C., in a rally Thursday in front of his Winston-Salem office because Burr reportedly briefed the White House in 2017 about the FBI’s investigation of Russian influence of the 2016 presidential election.

The demonstrators held signs such as “Shame on Senator Burr,” “Congressional Hearings Now” and “No President is Above the Law.” Burr grew up in Winston-Salem.

Steve Bird of Greensboro held a sign with the words, “Lock Him Up, Lock Him Up” amid a picture of President Donald Trump behind red and strips resembling prison bars.

“Senator Burr, do your job,” Bird yelled through a bullhorn. “Hold this administration accountable.”

Most of the demonstrators are members of Indivisible Guilford County NC, which is a group of Greensboro and High Point residents who support the country’s democracy and oppose the Trump administration, according to their Facebook page.

“The president is first and foremost a citizen,” demonstrator Mary McInerney of High Point said. “No citizen is above the law.”

After their 60-minute protest, six demonstrators went to Burr’s office on the fifth floor of Two Piedmont Plaza at 2000 W. First St. They told a Burr staff member about their criticisms of the senator.

“The patriots of the nation are finally going to get their justice against this guy,” Bird said of Trump. He joined the other demonstrators as they left Burr’s office.

Dean Myers, the chief of staff in Burr’s Winston-Salem office, referred questions about the rally against Burr to his Washington office.