Budget showdown continues: Which Dems are on the fence? 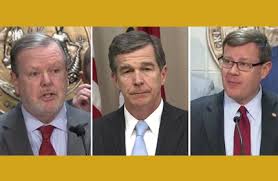 The General Assembly will likely vote on a budget veto override this week as the GOP once again tries to ram through a budget which does not address the concerns of hard-working North Carolina families or our valued educators. Instead of expanding Medicaid and investing in our schools and our students, the politicians are trying to give even more of their misguided tax cuts to big corporations and the ultra-wealthy.

Although the GOP lost its supermajorities in 2018, several Democratic lawmakers stood with the GOP to vote for this budget and its misguided priorities. Some may vote differently on a veto override, but Republicans will be doing their best to encourage Democratic lawmakers to break ranks in exchange for pet projects and pork barrel incentives.

So which Democrats are we concerned about?

Why is this important? The state budget has a major impact on everyone in North Carolina. We know the current proposed budget falls far short of providing our children with the quality education they are promised by our state constitution.

The GOP budget does not value public schools and does nothing for hard-working North Carolina families who can’t afford health care. Instead of giving more tax cuts to the top 1%, lawmakers should pass a budget that restores education funding to pre-recession levels and expands Medicaid for low-income families.