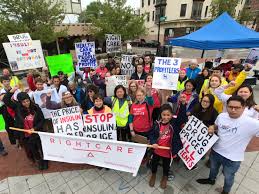 Diabetes is a disease which has grown to become a major public health crisis in the United States. In May 2019, the Centers for Diseases Control (CDC) reported that more than 110 million Americans are living with diabetes (30.3 million) or prediabetes (84.1 million).

On April 2, 2019, media group France 24 reported that insulin rationing in the United States has led to the deaths of at least six diabetics over the past three years. The Yale Diabetes Center states that one in four American diabetics are now rationing their insulin.

According to IBM Watson Health, the price of insulin in the United States jumped over 600 percent from 2001 to 2018. The American Diabetes Association estimates that diabetes accounted for $237 billion in direct medical costs, including an average of $9,600 per person in medical expenditures just for their diabetes care.

Insulin was discovered almost a century ago by Canadian researchers — Frederick Banting, Charles Best and J.J.R. Macleod. They sold the patent to the University of Toronto for just $1 so that their discovery could benefit patients. Today, pharmaceutical companies are still charging patent-like prices.

America’s sky-rocketing prices of insulin have no basis in a market economy. Firstly, there is no valid patent which needs to be protected as an intellectual property right. Secondly, the currently closed U.S. insulin-market simultaneously prohibits the imports of insulin by individual patients, and places barriers to market entry for lower-priced insulin products.

It is exactly this scheme which reflects the socialist nature of the current U.S. health care system — a closed market with three protected companies providing insulin to patients. As in socialism, imports are banned, and a closed market is made self-sufficient.

Absent domestic competition, patients and taxpayers bear the high cost of a life-saving medicine and are at the mercy of pharmaceutical companies, which control the market without any accountability. Market principles which ensure competition, a level playing field, removal of barriers to market entry and price transparency are thrown out of the window.

It is crucial to bring more insulin options to the market faster. One thing that can be done immediately is to fast-track FDA regulatory approval for recombinant human insulin (rHi) biosimilar based on the already existing clinical data of other countries.

There is a track record of 15 years and over 2 billion doses of human insulin administered worldwide, presenting real world evidences and real world data of safety and efficacy, which FDA should use to immediately approve another insulin option for the U.S. market by the end of October 2019.

Instead of illegally buying insulin biosimilars in Mexico at a fraction of the price at which it is sold in the U.S., individual American patients should be able to buy the same product in the United States legally.

FDA recognizes that diabetes is considered to be, “a serious condition” and the FDA’s fast tracking has the “ability to address emerging or anticipated public health need” of over 110 million America’s patients. One of the FDA’s requirement for fast tracking is the “unmet need.” The unmet need of a number of diabetes patients, who died because they could not afford the insulin treatments currently available on the U.S. market, should have been foreseen by the FDA much earlier.

American lives can be saved by applying market principles in the health care arena. By removing barriers to market entry and creating a level playing field, there will be increased market competition resulting in lower and transparent prices. Insulin and other prescription drugs can and should be made accessible and affordable to America’s patients, and the cost of health care significantly reduced to American taxpayers.

The Trump administration and Congress must seize the opportunity to significantly reduce the price of insulin immediately.

Natasha Srdoc and Joel Anand Samy are co-founders of the International Leaders Summit.

Digital Director
Posted in Health Care, Human Rights
Sign up for our mailing list to receive a weekly newsletter with fact-based commentary that cuts through the noise to give trustworthy insight about how North Carolina politics and issues impact our everyday lives