While teachers go without a raise, lawmakers try to pass yet another corporate tax cut 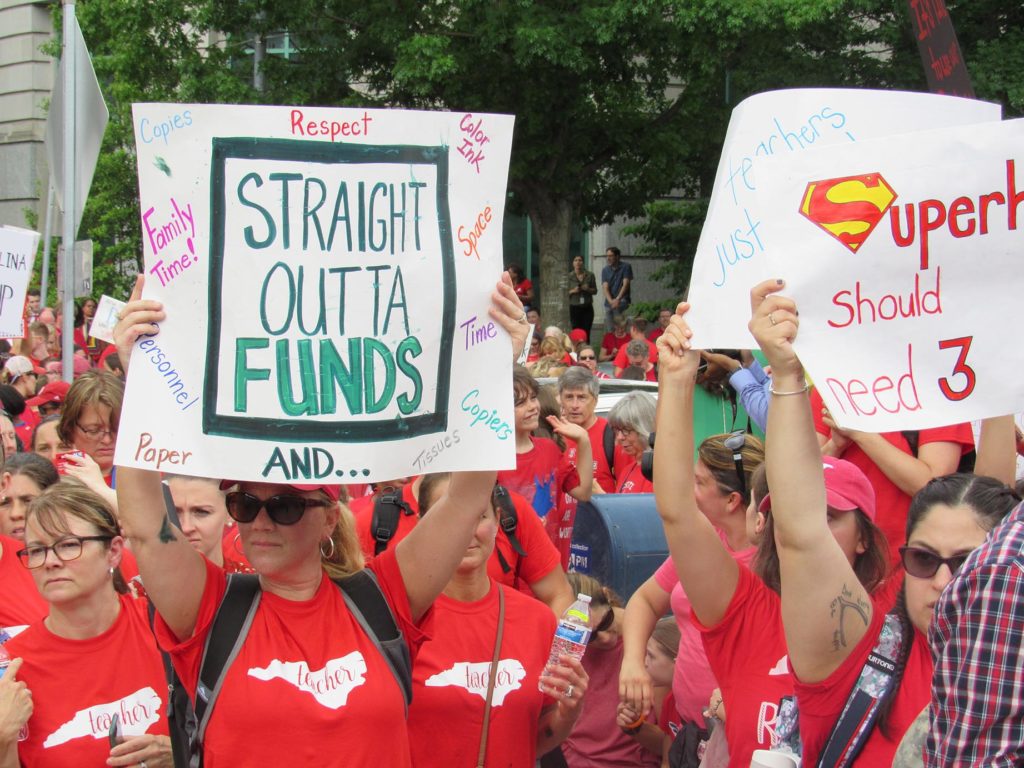 NC Senate: “Sorry teachers, we can’t afford to give you a decent raise.”Also NC Senate: “$1 billion in corporate tax cuts? No problem!”

RALEIGH — While North Carolina public school educators continue to work without the raises they were promised for the 2019-20 school year, Republican lawmakers are trying to ram through another $1 billion in corporate tax cuts this week instead of negotiating a budget that values public education.

Senate Republicans approved a third reading on Thursday of a corporate franchise tax cut that would eliminate $1 billion in state revenue over five years. At the same time, Senate Republicans are also holding public schools hostage over a five-percent difference in the amount of teacher raises contained in the vetoed Republican budget vs. Gov. Cooper’s compromise budget proposed in July.

Gov. Cooper’s compromise offer proposed an 8.5% pay raise for educators over two years, but Republicans are demanding to give only a 3.8% increase over two years. Meanwhile, the GOP continues to ignore non-certified school employees such as TAs, bus drivers, and cafeteria workers who make less than the $15/hour minimum wage for other state employees.

“Republican leaders are trying to claim they don’t have enough revenue to give school employees a decent raise while at the same time they’re trying to shell out another billion dollars in corporate tax cuts,” said Gerrick Brenner, executive director of Progress NC Action. “Either you care about public schools, or you care about lining the pockets of corporate CEOs and shareholders. You can’t have it both ways.”

Adjusted for inflation and enrollment, public school funding is still less than it was 10 years ago when the Great Recession began. But instead of restoring education funding to pre-recession levels, Republican lawmakers have handed out $3.6 billion to millionaires and special interests since 2013.

“Once again, politicians in Raleigh are forcing a permanent recession onto our public schools so they can give yet another tax cut to the top 1%,” added Brenner. “Then they turn around and point their finger at public schools instead of the billions in tax cuts that are draining state revenue. North Carolinians must come together and elect a legislature with better priorities.”

Communications Director
Posted in Economy, Education
Sign up for our mailing list to receive a weekly newsletter with fact-based commentary that cuts through the noise to give trustworthy insight about how North Carolina politics and issues impact our everyday lives